(DRUMROLL) AND THE WINNERS ARE…

The NZ International Comedy Festival with Best Foods Mayo honoured the outstanding talent on show in the 2021 programme at Electric Kiwi Last Laughs on Sunday 23 May, rewarding excellence with the New Zealand Comedy Trust awards: The FRED, for the best New Zealand Show in the Festival, and the Billy T Award. Started in 1997 and inspired by comedy legend Billy T James, this award celebrates the growth of fresh talent in the New Zealand comedy industry. Each year it is awarded to an outstanding emerging performer with a commitment to their comedy career. Brynley Stent took home the prestigious Yellow Towel for the Billy T, a $3,000 cash grant from New Zealand Comedy Trust, $300 of free power from Electric Kiwi, alongside a hotel package from Accor Hotels and dinner at a SKYCITY restaurant of their choice. 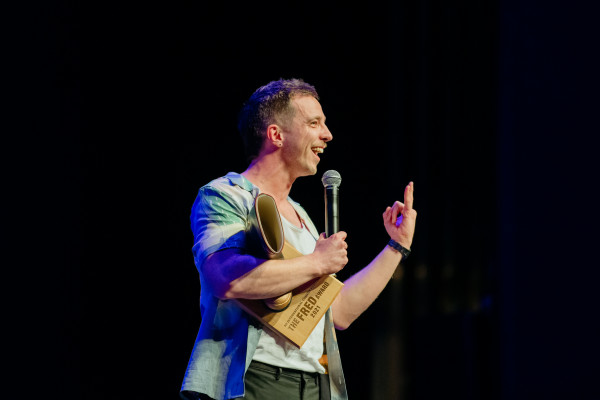 Named in honour of much-loved comedy icon John Clarke’s legendary Kiwi character Fred Dagg, The FRED Award recognises the Comedy Festival's Best Show by a New Zealand comedian. The FRED Award winner Eli Matthewson received the iconic Golden Gumboot and a prize package including; a cash grant of $2,000 from the New Zealand Comedy Trust, $300 power from Electric Kiwi, alongside a hotel package from Accor Hotels and dinner at a SKYCITY restaurant of their choice.